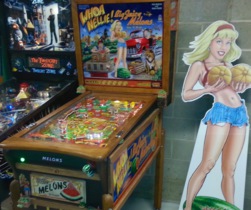 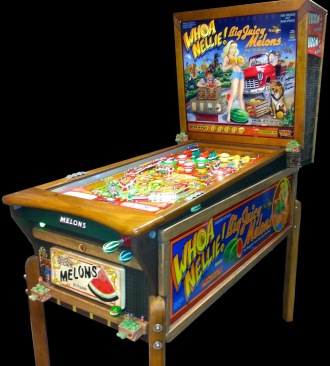 In 2013, I embarked on a journey to make a home-grown version of WhizBang's brilliantly conceived Whoa Nellie! Big Juicy Melons (WNBJM).  I let the reins go free on Nellie. Her gallop was sure and swift.  But, there were many steeplechases to hurdle. Here's what I learned during that ride.

For those unfamiliar with the genesis of this conversion game, the idea is the product of two established and highly talented members of the pinball industry, Dennis Nordman (designer) and Greg Freres (artist).  WhizBang Pinball (founded by Dennis & Greg) consulted with well-known artist and silkscreener, Wade Krause.  Wade suggested benefits to creating the backglass first.  Doing so would fix the theme and also serve as an income source for a stand-alone product.  I asked Greg Freres about his artistic inspiration for Whoa Nellie.  Greg has stated that he gained artistic inspiration for Whoa Nellie from Roy Parker’s artistic design of Gottlieb’s 1954 woodrail Daisy May.  The two games do indeed share a similar palette and campy humor.  The Daisy May blonde on the Gottlieb woodrail was a clone of Daisy Mae, the popular Li’l Abner comic book character.  Whoa Nellie’s political correctness is arguably dubious.  However, a close look at the Whoa Nellie art reveals that the women wield all of the power.  The male characters are portrayed as libido-driven dimwits.

WhizBang enjoyed technical input into the game's design from Ken Walker, Chris Edler, Mark Weyna and others.  A star rollover between the 4 pop bumpers bears an inside joke "10 Weyna Lit."  Even the legendary Roger Sharpe provided design input, after playing the original whitewood at the Midwest Gaming Classic.  There's a Youtube video of Roger playing the whitewood.

WhizBang made 1 EM game, a conversion from a 1957 Gottlieb Continental Cafe. Dennis selected that donor game based on the fact that he had one, with a broken backglass.  Dennis & Greg found a total of 4 Continental Cafe donor games. Creating the EM conversion game involved a tremendous amount of labor. Fortunately, Kerry Imming stepped in and developed a solid state system for WNBJM, which included a sound board. That development allowed WhizBang to make the remaining 3 solid state versions after the EM game’s debut.  On the SS version, the rules are slightly deeper, although the game is essentially the same as the EM.  While nothing can compete with the charm and nostalgia of an electromechanical game, the SS version includes great music by Speedy West as well as some unique sounds. Each of the 4 WhizBang games were sold to collectors for about $14K, as I recall. WhizBang sold playfields (2 runs of which the 2nd run had some minor color improvements), decal sets, plastics (which are extra thick, by the way), and “standees” of Melony to several pinball enthusiasts (like me), who ruminated about making a home-grown Nellie and who (like me) did not have $14K dedicated to purchase a single game.

Those of us wishing to do create a home-grown Nellie, discovered that the donor game was as scarce as hen's teeth. A couple of guys tried to use a similar vintage Gottlieb game as a donor (e.g. 1956 Gottlieb Toreador), only to discover that the immense conversion task was rendered impossible, without a Continental Cafe because the games shared the same ruleset. Even with the Continental Cafe as the donor, the quantum of work was enormous. For example, both the gobble hole return and the playfield arch had to be modified. The gobble hole scoop had to be customized to fit. Continental Cafe is a 2 player game whereas Nellie is a single player. The list of challenges is long. The WNBJM playfield has a much different configuration from that of Continental Cafe (e.g. multiple gobble holes on Continental Cafe versus a singular gobble hole on Nellie). Consequently, nearly all of those Nellie playfields are likely hanging on walls.

California collector, Brad Grant, set out to make a home-grown version. He successfully made the 1st home-grown Nellie. Learning that Brad was able to tackle the undertaking, I was inspired to give it a go. I was lucky to find a Continental Cafe, which resulted in the 2nd home-grown Nellie (mine). Thus, there are 2 home-grown EM Nellies (Brad's and mine). I suppose that Brad's is the west coast Nellie and mine is the east coast Nellie (I'm in NJ). Melony gets around. I hear that a couple of guys found donor games and have also undertaken the daunting project so a couple more EM home-grown versions may surface.

I outfitted my version with theme-appropriate, puerile melon "knobs" for the ball lift and shooter rods. I used the existing backbox molding and extended it to accommodate the larger lexan backglass. My design mimics the WhizBang cabinet crate design by affixing wooden planks around the cabinet decals. I covered portions of the cabinet with chicken wire. The melon crate "wallpaper"on the backbox is actually a one-of-a-kind montage. The thought of constructing a crate base crossed my mind. But, since my carpentry skills are very limited, I opted for the decorative, fluted wooden legs up front and heavier, pedestrian wooden legs for the rear.  The project was arduous.  Working on the game, with a cold beer "Weyna Lit" was essential because there was no blueprint.  This was not a routine playfield swap.  I experimented with post colors for awhile before going with a mostly red translucent array.  I opted for red flipper bats.  Most importantly, I equipped my game with a 1970s vintage Gottlieb chime unit. So, at least the sound is politically correct. Who can argue with that melodious chime?  In 2014, after the last WhizBang playfields were made, a handful of Whoa Nellie art boards (undrilled and utilized for playfield printings) were sold to collectors.  I was lucky to acquire one, especially since any new Whoa Nellie playfields will likely bear the Stern logo.

Brad Grant retained a professional cabinet-maker, Steve Gligorea, to create his game's cabinet. He did so out of some kind of reclaimed fruit crate wood. Brad helped me figure out which parts to purchase, when I was stumped. [Shout out to Brad. . .thanks again!].  The WhizBang versions all included the crate. Artist Greg Freres heard about my Garden State home-grown version. Greg was kind enough to autograph my game's instruction card.  Also, Greg posted photos my home-grown WNBJM on the WhizBang Facebook page.  In 2013 or 2014, Greg Freres joined Stern. In late 2014, Stern announced that it planned to manufacture WNBJM.  Perhaps the Stern version will have chimes.

I love the fact the game is a woodrail with return lanes, something that heretofore did not exist. Return lanes first appeared on Gottlieb's 1965 wedgehead Bank-A-Ball which, of course, sported metal rails.  My WNBJM plays fast. The game's sensibility is unlike any other game. The single drain lane between the flippers, flanked by rubbered posts, coupled with generous flipper return lanes conspire to bestow considerable ball control to the player. The campy art pops and the color palette is complimented by the warm woodrails and wooden horseshoe lock-down bar (on my home-grown version).  The gameplay is pure fun. It's a potent dose of electromechanical joy. With its slick silkscreened playfield and hyperbolic plastics, ball-flow is fluid. Whoa Nellie is wholly unique in both its look and play.   Just remember, Nellie isn't the one with the melons. Nellie is the horse.